The local scenery is stunning. Safe beaches, historic chateaux, abbeys, the mountains of the Haut Languedoc Natural Park with its picturesque gorges, natural rock pools, river swimming and canoeing, are all within 40 minutes, or much less, from your front door.

The Spanish border is about a 90 minutes drive, while the Pyrenées mountains are 2 and a half hours drive. 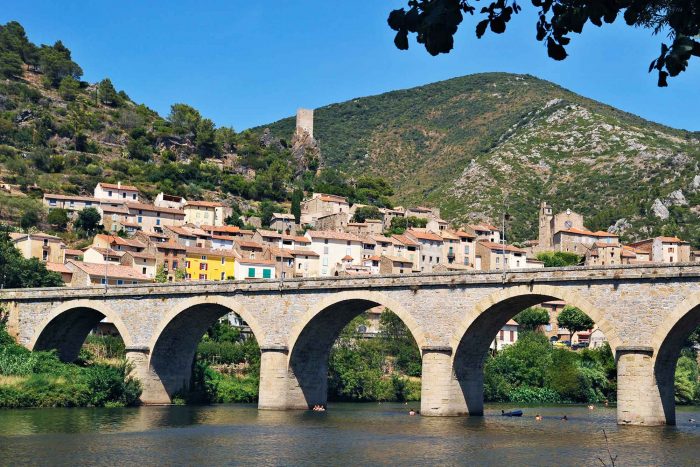 The tower of Roquebrun is the sole remaining trace of a Carolingian castle built to protect the inhabitants from barbarian invasions in the year 900. The picturesque village, with its local canoe centre, is perched over the banks of the river Orb and has a Mediterranean garden that is well worth a visit.

In summer the river beach is used for picnics, swimming as well as trout fishing.

Regularly described as one of the prettiest villages in France, Minerve is a miraculous village, almost an island, perched over the meeting of the rivers Brian and Cesse where they tunnel through deep gorges, and where in 1210 Simon de Montfort massacred the Cathars during the crusades. 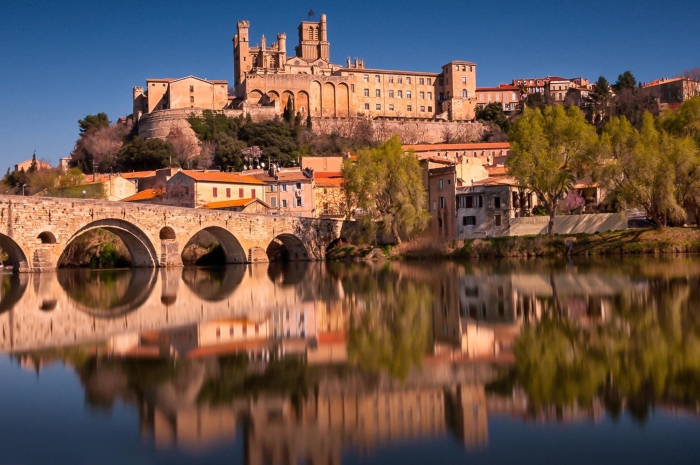 Béziers is founded upon a stone bluff which forms a bend in the River Orb, its skyline being dominated by the historic cathedral which has seen many an event unfold.

Built during the reign of Louis XIV, the Canal du Midi passes through Béziers, and it is now a UNESCO World Heritage Site. No visit to Béziers is complete without a visit to the aquaduct carrying the canal over the River Orb, and the recently restored 9 Locks of Fonseranes.

The long “Allée Paul Riquet” esplanade (named after the founder of the Canal du Midi, and one of Béziers’ most famous sons), with the theatre at one end, and the lovely Plateau des Poèts park at the other, is an attractive center to the town. In the middle of the esplanade is a statue of Riquet. Art is everywhere in Béziers, and it’s impossible not to notice the work of architects and sculptors at nearly every turn!

Béziers is an excellent town for shopping. It has shops and stores of all sizes, from the Polygone shopping mall, the Galeries Lafayette department store to small trendy boutiques. And if walking and shopping are too energentic, why not just hop onto the Petit Train to explore? 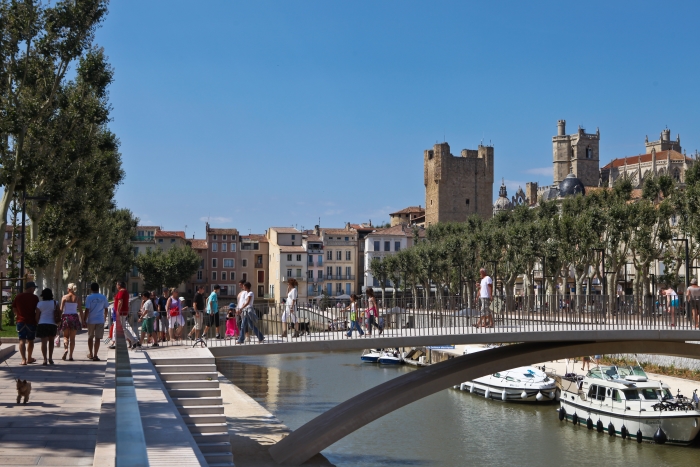 Narbonne is the oldest town in the south-west of France. Founded by the Romans in the second century BC, it was a major port, although it now lies some 20 km from the sea.

Today the centre of Narbonne, bisected by the flower-bordered Canal de la Robine, is an attractive place for shopping and sightseeing. Without a doubt the best place to head for is the 100-year old Les Halles (covered market, featured in Rick Stein’s French Odyssey) by the bank of the canal. This award-winning market is said to be one of the best in France and the crowds milling around the 80-plus stalls are testimony to this claim. Open from 6 am until 1.00 pm daily, the market is overflowing with local produce: glistening displays of fresh fish and seafood, piles of melons, peppers and tomatoes, and the many varieties of charcuterie (cooked meats). It is cosmopolitan as well though … it’s one of the few places in the area with a good selection of non-local (and even non-French) cheeses.

On Thursdays there is also an open air market stretching along the canal bank near the Halles, with flower and clothes stalls, among others. The canal itself is lined with waterside cafés where you can refresh yourself in the shade of the plane trees.

The old Cité. The mediaeval walled ‘Cité’ lies on the right bank of the River Aude and is featured on UNESCO’s World Heritage list. It is still home to a population of approximately 120, is now very touristic but well worth a visit to its shops and craftsmen. The ultimate stronghold, built in the 12th century, it was the home of the Trencavels, Vicomtes of Carcassonne. While there, if time, try to see Carcassonne town, a few minutes by car from the Cité. There is a large, pleasant, mostly pedestrian area with the main square lined by restaurants.

At a distance of 800 metres from the Cité, on the commune of Pech Mary, you can see the flight of the world’s largest birds of prey.

A sophisticated city with lots of museums, great restaurants and shopping – and a great tram public transport system. The Fabre Museum is one of the biggest museums in France and holds Flemish, Dutch, Italian, Spanish and French collections. For more information visit the Tourist Office in the Place de la Comédie.

Half Catalan, half French, Perpignan is Languedoc at its most exotic. The last major town in Languedoc before the Spanish border there’s a real mix of cultures in this corner of the region: Catalan, Romany and North African all co-exist in this sunny city of palm-lined squares.

Note: Times stated are approximate and refer to driving times by car.